The crew of DCVP filmed some exciting hunts in Botswana this year. Among these were two buffalo hunts in the Sankuyu concession area, which lies on the edge of the Okavango Delta. The hunts were guided by Ian Newmarch and Lee Potter of Coenraad Vermaak Safaris.

The Greco family from Houston Texas had the fortune of experiencing a classic-style buffalo hunt in this pristine area. After five days of arduous but exciting tracking, the hunt reached its climax with an adrenaline-inducing sequence of events.
We could see dust clouding from the buffalos’ movement and knew it was a large group. Their grunts and bellows and the smell of their dung and sweat sent the hearts pounding. A small ‘mock charge’ from some young bulls then got everyone’s attention, forcing the hunting group into the cover of some rather unsubstantial mopane trees.

In a matter of seconds, we had hundreds of buffalo moving towards us – totally oblivious to our presence. We were completely surrounded and there was no way out. I managed to get some awesome footage of buffalo cows, calves and bulls descending on us, with the hunter Chuck Greco keeping his eye close to the scope and his finger ready to pull the trigger when the call was made. The leading buffalo were now within 15 yards of us – hearts were racing, limbs were begging to fidget or flee, and anticipation of the hunt was overriding fear.
At last an old dagga boy with gnarly bosses and deep drops walked into sight. Chuck responded quickly to Lee’s instructions and made his shot at the perfect time – just before we were spotted. Buffalo scattered through the mopane with a thunderous cloud of dust, confusion and excitement. The bull took off towards us and tore passed us through the trees, allowing Chuck and Lee to put some more shots into him. Some tense moments later, Chuck finally came face to face with his impressive trophy and secured the finishing shots. It was the most exciting buffalo hunt – and what a treasure to have on film. I thank the Greco’s for allowing DCVP to be a part of this special hunt.

Click here to see what the Greco’s had to say about their buffalo hunt video. 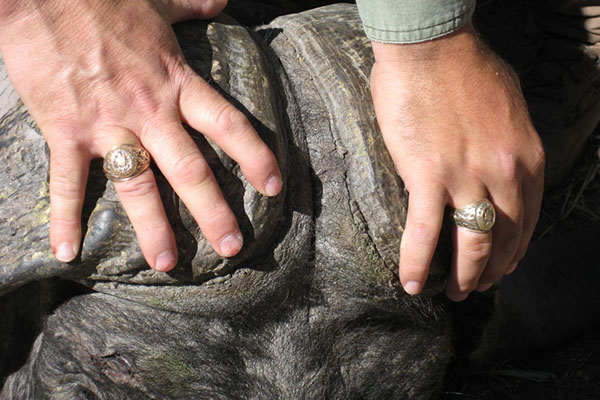