This year’s adventures included an exciting trip to the swampy plains of the Zambezi Delta in Mozambique.
Organised by Russell Lovemore of Safari Trails International
(www.safari-international.com), this hunt took place on Coutada 10 – a concession run by Bahati Safaris (www.bahati.com).

I will not lie… I had my reservations about accompanying a hunt to the notorious Mozambique swamps. I had heard numerous horror stories of negotiating razor-sharp razor grass, whilst wading through chest-deep leech-infested water with mosquitos so thick, you couldn’t help but inhale them. I had a sense of forboding that I was about to experience something quite “unique”, for lack of a better (or more polite) word.

Razor grass? Check. Wading? Check. Mosquitos? Check. But, looking back, it really wasn’t as bad as people made it out to be. It’s not for the faint-hearted that’s for sure, but it actually turned out to be one of my favorite filming adventures to date. Would I do it again? Absolutely.

This area of Mozambique is simply stunning. Landscapes change from patches of the typical ‘jungle’ type of terrain that so many people envisage when thinking of Africa, to the vast open expanses of the grassy swamp lands. This openness made for such unique footage, albeit rather tricky hunting conditions! The unusually rainy weather also made for very dramatic sceneries and we were greeted each day by beautiful rainbows and impossibly grey skies.

I filmed four buffalo hunts on this 10-day safari, all of which took place in the heart of the swamps. The first hunt was not one that eased us gently into swamp conditions and did leave me thinking “What on EARTH have I got myself into?” We got onto a herd of buffalo after a brief lunch-break and began an epic stalk that was to be the most exhausting stalk of my safari-career to date. Initially the razor-grass made for good cover and we were able to creep through it without much difficulty. However, this buff herd were quite some ways from the razor grass, in the complete open. Which meant, of course, we needed to crawl. Now allow me to digress slightly. When asking what sort of attire one should take to the swamps, I was instructed to bring clothes that dried easily and gloves for the razor grass. No one mentioned anything about knee pads. Knee pads are crucial. Especially if you, like me, find knees quite necessary in day-to-day life. Even if it means you end up looking like a skate-boarder, you will give very little cognizance to this fact once you embark on a mile-long crawl.

We started crawling at the edge of the razor grass and I soon realized I was going to have to expend a little more energy than usual, only having three limbs available to do the crawling, while I engaged my only free limb in camera-wielding to capture the action. Trying to keep up with stronger, faster men whilst hobbling on three limbs, was nauseating. By the time we had reached within shooting distance of the buffalo, our palms and knees were bleeding from the tiny thorns and grass hairs we had encountered the entire way. Just as Mike Howard was getting ready to shoot, something spooked the herd and they ran off. Our stalk continued with much huffing and puffing. Eventually, guided by PH Coert Jansen van Rensburg, Mike was able to make an excellent shot on a great old bull and the rest of the herd went thundering off. No sooner had the bull gone down that we all forgot our exhaustion and felt a sense of extreme satisfaction and exhilaration that comes with working really hard for one’s quarry. My prior thoughts of doom were wiped away quickly as we celebrated the hunt and watched the sun disappear in a glorious array of colour beyond the horizon.

The adventure did not end there… but for fear of spoiling the mystery of hunting the untamed swamps, and to ensure I don’t write an entire book on this hunt, I will leave the rest to your imagination. Mike, Barry, Bubba and Dale were thrilled to have their adventures captured on film, because it really is hard to describe to people what it is truly like, unless you can show them.

Click here to see what Mike Howard and Bubba Saulsbury had to say about having their swamp adventures filmed. 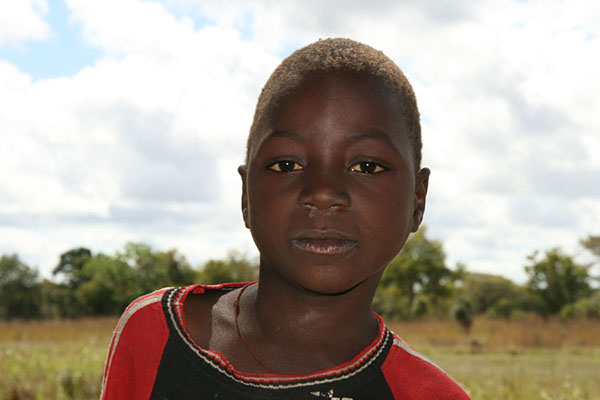 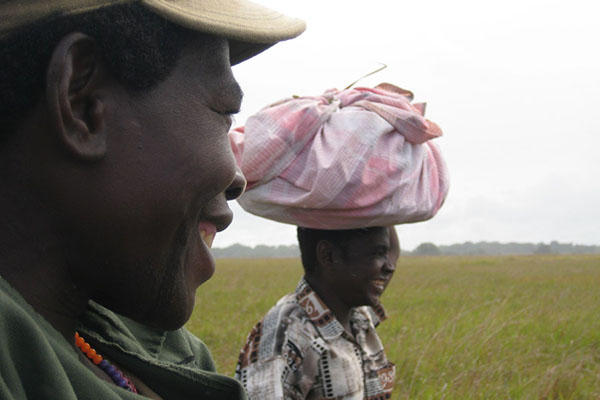 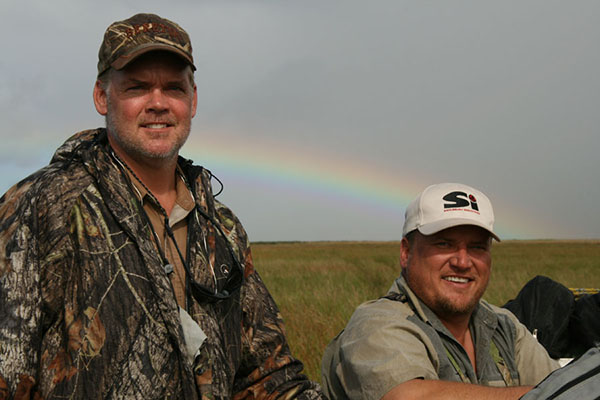 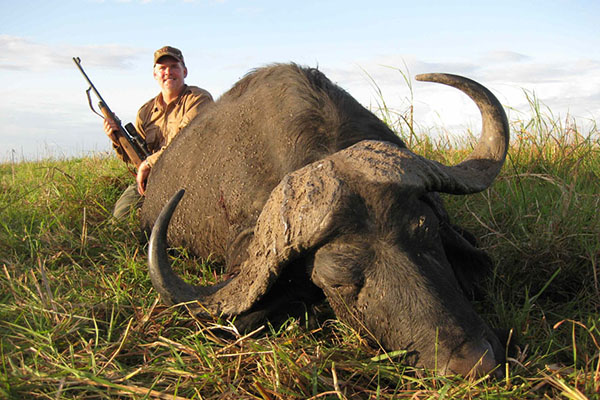