In February 2012, Videographer Kerry Wallace travelled to Azerbaijan to film a Dagestan Tur hunt with loyal repeat-client & friend, Mike Pack…
Kerry Wallace writes:
After a fascinating two-day touring stop-over in Istanbul, Turkey, Mike & I arrived in Baku to begin our hunting adventure in Azerbaijan. A 5 hour hair-raising car trip took us to a small village at the foot hills of the mountain range we were to ascend. Here we switched motor vehicles to a 4×4 truck that could get us to the furthest point before we would make another switch, this time to horseback. Our driver looked to be about 12 years old (although was apparently 17 and the son of a very important man in the village). He was equally as deranged behind the wheel and we narrowly missed several head on collisions with many of the old Russian model cars. Our horses were dainty creatures, all stallions, and seemingly personality-less as is often the case with rural pack-horses. Once we had loaded all of our belongings onto the horses and then some, we set off on our 3 hour ride for camp. I very soon beamed with admiration for these horses. All 3 hours of the ride was through the rockiest of river beds. We had several crossings through the ‘pumping’ icy river (made up from melted glaciers) and I began to giggle as I realized how little control I actually had. It was quite freeing to ‘let go the reins’ so to speak, and trust in the horse’s ability.

We finally arrived in camp – a very basic camp consisting of one-man tents and plastic covered dining / cooking areas. There was no shower, no toilet and no permanent structures whatsoever. However, the scenery beat any place I have visited in my career – or my life for that matter. It was entirely breath-taking: we were encircled by vividly green mountains covered in flowers, lined with trees, capped by snow and jaggedly carved by rivers. Soon after settling into our cozy spider-filled tents, we glassed the steep slopes across from us with a spotting scope, and I was thrilled to see my first Brown Bear and a few herds of Tur way off in the distance. I glanced at my watch to see it was 7pm, but felt like 3pm would at home. The sun only went down at about 10pm that evening – casting a stunning red glow on the peaks around us.

It took a couple of days for Mike to get his Tur. A normal day would consist of waking up in the dark (around 4:30am), having a breakfast of oatmeal, tea and scrambled eggs. We’d then set off on horse back across rivers and up the mountains to where the Tur lived. Riding up steep, steep mountains in the pitch dark brings new meaning to the word adventure. Again, I just smiled and shook my head. I had brought my night vision camera with me, but all I could really pick up were my horse’s ears and the back end of the horse in front of me. Even once light, it was hard to appreciate the sheerness of the terrain – the cameras somehow seemed to flatten it out.

Once we had reached a high enough location, after regular stops to let the heaving horses catch their breath, we would dismount and gather our daypacks and climbing sticks – ready to climb further, where the horses could not go. The horses, amazingly, would just stay exactly where we left them. Made by the locals out of wood and sharpened on the one end, the hiking stick was a vital tool. Counter-intuitively, you would carry it on the side of you that was not closest to the steep drop to the rivers way below. We were taught to dig the sharp end of the stick into the ground and lean into the mountain (away from the steep gradient). It is amazing how helpful that was. With Mike being a fitness fanatic, I was worried I would not keep up. The guides were also worried about me keeping up – and my being a woman seemed to worry them considerably. In fact, at one point, they all determined that I should stay in camp because I would not be strong enough for the hike they had in mind. My heart sank. Luckily Mike insisted I join them and with a small amount of consternation, they got my horse ready for me.

Hiking to the areas the Tur hang out is not for the faint hearted. Having said that, the guides were very good about going slowly so we could catch our breath. In one of my diary entries I wrote: “I feel like I have narcolepsy, because every time we sit for any amount of time I start to fall asleep. I don’t know if it’s the lack of sleep, or the altitude, or both.” At 9000-10 000 feet, we were pretty high up, but thankfully not high enough to get altitude sickness. Having prepared well with loads of running training I was able to keep an even breath for the most part. However, the extreme stiffness in my upper legs from descending the peaks each day took a little getting used to. I also found my feet got quite sore from the twisting whilst walking along the steep sections. I realized that my good old Courtney boots would probably have been the best option.

The area we hunted with Safari Outfitters, had an abundance of Tur. We saw hundreds of the creatures (which resemble Barbary sheep) littered all across the mountain tops. On the day Mike shot his ram, we had hiked quite a long way up to a vantage point where the guides had a good feeling we would find a trophy Tur. We had crossed several patches of snow and I marveled at how high we were as I looked back down towards camp. The temperature up there dropped quickly as a wind picked up. I remember lying in the grass, eating a piece of dark chocolate, scanning the unbelievable view before me whilst watching clouds tumble over the mountains, thinking ‘this is living!!’

Bad weather started to roll in, and just as we were about to pack it in for the day, the guides spotted a group of rams coming back over the ridge. In a mad dash for cover and a good spot to shoot from, Mike steadied himself on his knee to take a shot at the best ram of the bunch. After the first shot, the Tur ran out of view for a short while before running back along the ridge where he stopped and Mike was able to put a finishing shot in him. And just in time! As we were cleaning the animal, the fog surrounded us and the light faded. It was a nerve wracking walk back to camp in the rain, mist and dark. Every time I wobbled a bit, the main guide Asiman would grab the back of my jacket and made sure that I did not tumble down the mountain side.
By the time we got back to camp it was 11pm and bucketing with rain. After getting into some dry clothes, Mike & I sat and played cards in the plastic eating area. The rain plummeted down as the guides busied themselves with making our dinner and some hot tea. The spirits were very high, despite the down pour. We marveled at what an amazing experience this had all been while we ate our noodles and soup.

The following day we saddled up and went back down the mountain and out of the wilderness area to begin our journey home. This trip definitely rates up there as my most unique hunting adventure so far. I would go back in a heart-beat and can highly recommend this trip to any discerning hunter who is fit and in good health. A big thank you to Mike for putting this trip together and for using our services yet again! 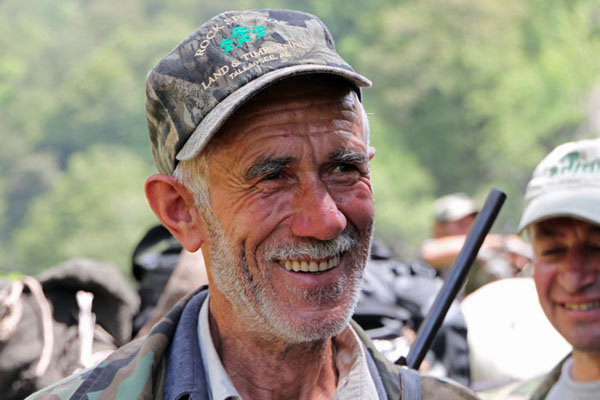 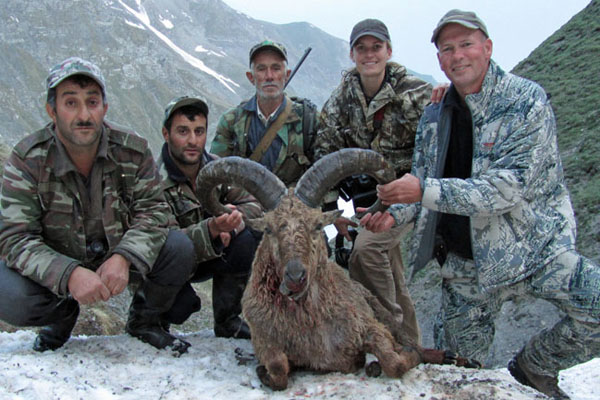