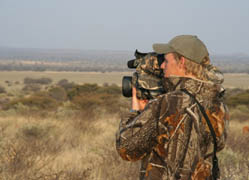 Born on 2nd November 1979 in Durban South Africa, Rayno grew up hunting, fishing and horse riding in the Midlands of Kwa-Zulu Natal on the Ranch’s “Westlands” & “Kusan”. After his schooling in Pietermaritzburg, he studied Agricultural Management at the University of Natal.

During this time he also filmed numerous Big 5 hunts all over the continent before obtaining his Professional Hunters & Dangerous Game Licence in 2000.
Rayno has hunted and fished extensively all over Africa including Mozambique, C.A.R, Zambia, Tanzania, Botswana, Zimbabwe & Kenya. This has enabled him to work in some of the most famous reserves and hunting concessions in Africa: the Serengeti, Ngorongoro Crater, Luangwa South, The Selous, Bangwelu swamps, and National Geographic’s well known Dzanga-Sanga Bai in C.A.R., where Rayno documented the Western Lowland Gorilla. Rayno’s filming, fishing and hunting travels have taken him beyond Africa to the USA and Mongolia.
Rayno is also a professional fly fishing guide, and his hobbies include photography, travel and spear fishing.